“We get to decide what goes onstage”

Penny Babakhani on sustainable producing, the climate crisis, and leaving behind the ‘old world’ post-Covid

Almost a month ago, a strategy consultancy company called BritainThinks published a report on the findings of their research programme, ‘Coronavirus Diaries’. For three months, from April to June, they monitored the mood, news consumption, and opinions on the government, of fifty people– from a variety of backgrounds, occupations, and geographical locations across the UK. The participants ranged from small business owners, to self-employed and gig-economy workers, to non-frontline essential workers, to people working from home. To supplement this more personal level of data tracking, BritainThinks also polled a much larger pool of UK adults on two separate occasions in April and June.

You’ve probably seen the headlines summarising their findings. Only 12% of Britons want a return to life “exactly as it was” before the Coronavirus crisis, and for many, “the worst-case scenario is that the UK returns to ‘normal’”. When looking at areas for improvement, the emphasis was on increased funding for the NHS (60% of respondents indicated they’d be willing to pay higher taxes in order to do so), increased wages for key workers, and an economic revival effort evenly spread across the country (rather focused solely on London).

Amongst other findings about the volatility of public opinion, and division surrounding how to achieve substantial change, one of the most poignant findings came towards the end of the report, in a single phrase. There is a desire to see good come from this.

Of all the people I’ve spoken to about the future of the Arts post-Covid, Penny Babakhani is one of the few who embodies that phrase. She feels the constant, pressing potential of this moment– for it to be a turning point; a rupture in our attitude to the climate crisis; a time for the radical re-thinking of the organisational landscape of theatre.

She talks about pressing commercial theatre producers to commit to systemic change in the wry, tongue-in-cheek sort of way you might talk about trying to get a toddler to let go of the remote control. She is limitlessly determined to changing the apparatus of cultural hegemony, and if you haven’t heard her name before, get used to it– you’re going to be hearing it a lot more in the coming years.

I sat down to chat to Penny about her hopes for this moment, how her values as a creative producer have developed in tandem with her understanding of sustainability, and the cultural legacy to which she is heir– a legacy which lies somewhere in the intersection between Iran, Germany, and the UK. 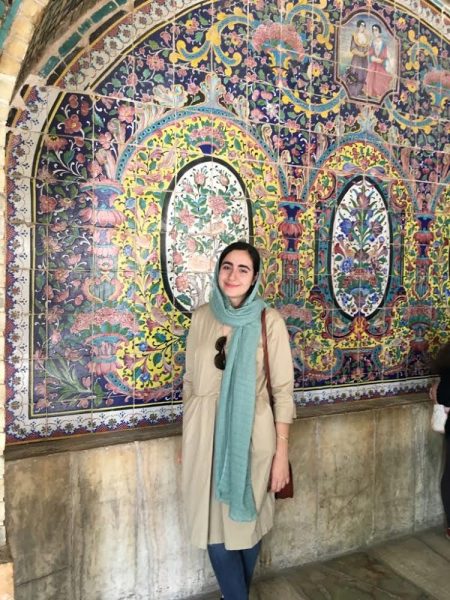 Penny graduated with a degree in English Literature from Durham in 2016, before studying an MA in Creative Producing at Mountview– which she completed in 2017. Since then, she’s gone on to work at Selladoor in programming, production and administration– and she’s now on furlough from her role there as full-time Administrator.

At the same time as doing all of this, she’s continued to develop shows as an independent producer, with her most recent sell-out show, Dual, at the Vault Festival earlier this year, winning a ‘Show of the Week award’, as well as garnering a huge critical response. People called it ‘electric’, ‘powerhouse writing’, and Lyn Gardner said it was ‘a form of liberation’.

You might know her from a recent Stage feature, in which she discussed her decision to donate her entire furlough salary to funds in support of freelance theatre-makers, and encouraged other furloughed staff to do the same. Or you might know her from her insanely well-crafted and thoughtful Twitter threads, which are truly in a league of their own.

She’s one of the few people I know who, when faced with circumstances that benefit her, only becomes more resolved to use those circumstances to lift other people up, and dismantle the systems that perpetuate those privileges.

You can find Penny on Twitter @PennyBabakhani, and make sure to check out her recommended charity, Arts Emergency. You can find the tweet we discussed at 19:38, from Tarek Iskander, here.

To find out more about Dual, read about it here, and here.

FreeBird · PENNY BABAKHANI on sustainable producing and the climate crisis